A recent Gallup poll found that a majority of Americans (71 percent) have a “great deal” or a “fair amount” of trust in local government. Moreover, Americans have had greater trust and confidence in local over state government in recent years.  The poll, conducted annually since 1972, demonstrates that local governments have maintained a constant level of confidence, ranging from its lowest level of 63 percent to its highest of 77 percent. State government has varied over the years, the lowest rate of confidence in 2009 at 51 percent.  The current level is 62 percent. 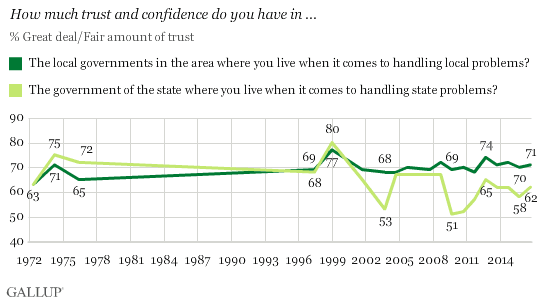 When the results are separated amongst party lines, both Republicans (75 percent) and Democrats (66 percent) have greater confidence and trust in local over state government.  Over the course of nearly two decades, local government has continued a relatively consistent level of confidence.

Do the results of this national poll mean that the efforts of some Texas legislators to preempt cities and centralize power in Austin are in trouble?  Only time will tell.

(Editor’s note:  The chart above and supporting information is available directly from Gallup.)

Both the Senate Intergovernmental Relations Committee and House Committee on Elections have interim charges related to local petitions, such as referendum and charter amendment petitions.  The focus of interim hearings on those charges has been on recent legal challenges to petitions related to equal rights ordinances, drainage fees, and comprehensive plans.

Legislators heard testimony from petitioners and their lawyers, who complained that the petition process is too difficult and should be more “uniform.”  It appears somewhat odd that the legislature would concern itself with a purely local process.  Texas has no provision for referendum at the state level.  It is solely a creature of home rule cities, and then only if the city’s charter – which is adopted by a vote of the citizens of the city – authorizes them.

In the five years preceding 2008, a survey conducted for the Texas Home Rule Charters book showed that referendum provisions were used sparingly by the voters.  A total of 15 propositions were placed on the ballot, with 10 being approved, 3 failing, and two instances where the city council took action, thereby removing the issue from the election process.

Testimony by witnesses at the recent hearings indicated that they have problems with petition submission procedures, how the ballot is worded, or whether they got the outcome they desired.  Some also described referendum as a “right” to get an item placed on a city’s election ballot.  They appear to believe this regardless of whether the majority of voters disagree or whether they fail to follow state and local guidelines for petition submission.  Some committee members tended to paint city officials as the bad guys who attempt to subvert petitioners at every stage.

Likely recommendations from the committees include:

The League will continue to monitor and report on the interim activities of the committees.

On September 16, the State Office of Administrative Hearings (SOAH), acting for the Texas Commission on Environmental Quality (TCEQ), approved an amended water right permit application by the Brazos River Authority (BRA).  The approval resolves ambiguity on “return flows,” such as treated wastewater. Once discharged into a state river, return flows are subject to appropriation by others. However, appropriative rights in the return flows of others can be later reduced or terminated once the discharger directly reuses or obtains an indirect reuse bed and banks authorization under the Texas Water Code.

The application for the water right permit was originally filed by BRA in 2004. The permit was contested by a variety of groups, including affected cities that claimed legal rights to their return flows discharged into the Brazos River from wastewater treatment plants. The lengthy procedural history involves contested case hearings at SOAH on the original permit, as well as the various amended versions.

The week of November 7-11, 2016 is “Municipal Court Week” in Texas.  To celebrate, the Texas Municipal Courts Education Center (TMCEC), in collaboration with stakeholders across the state, has prepared a model resolution (DOC) for city councils that wish to publicly demonstrate their recognition of the importance of municipal courts, the rule of law, and the fair and impartial administration of justice.  View more information from TMCEC.