During the National League of Cities Congressional City Conference last week, TML President Martha Castex-Tatum, President-Elect David Rutledge, Past President Mary Dennis along with TML staff met with Texas Senator John Cornyn. At the meeting, TML officers thanked Senator Cornyn for sponsoring the State, Local, Tribal, and Territorial Fiscal Recovery, Infrastructure and Disaster Relief Flexibility Act. The bill would allow greater flexibility in the use of State and Local Fiscal Recovery Funds (SLFRF) toward emergency relief in response to natural disasters and for certain infrastructure projects beyond those currently specified in the American Rescue Plan Act (ARPA). The bill passed the U.S. Senate and has stalled in the House. Interested city officials are encouraged to talk to their representative about the impact of the legislation. 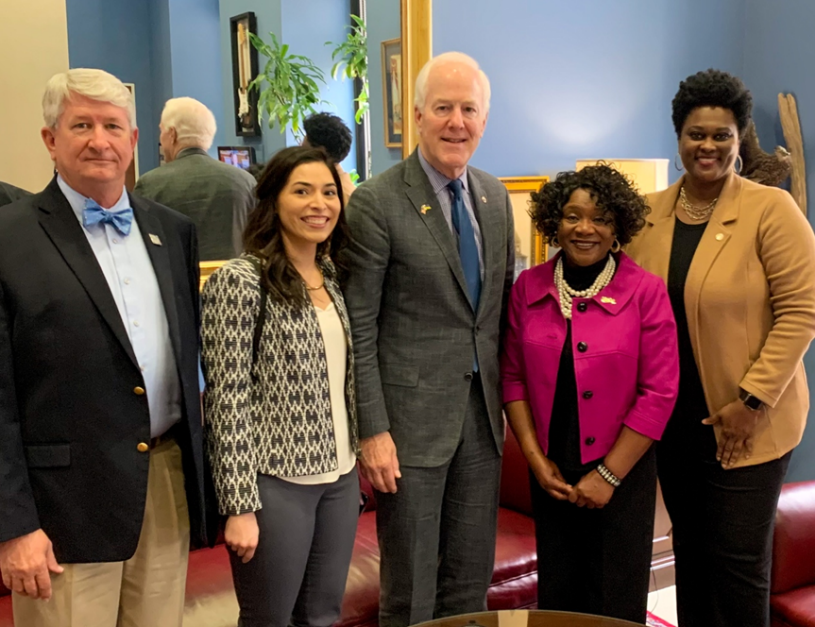 In November 2021, the federal Infrastructure Investment and Jobs Act (IIJA) was signed into law. The IIJA is altogether a $1.2 trillion bill that will invest in the nation’s core infrastructure priorities including roads, bridges, rail, transit, airports, ports, energy transmission, water systems, and broadband.

The League will monitor state and federal agencies and work with the National League of Cities (NLC) to access the latest information relating to the IIJA. We will be providing periodic updates in the Legislative Update on resources for Texas cities on how to access IIJA funding for local infrastructure projects.

Department of the Interior (DOI)

Last week, DOI released draft guidance to states on how to apply for the first $775 million in grant funding (of a total of $4.7 billion) under the IIJA to create jobs cleaning up polluted and unsafe orphaned oil and gas well sites.

DOT is seeking comments on IIJA changes to the Capital Investment Program, which is a discretionary grant program that funds transit capital investments, including heavy rail, commuter rail, light rail, streetcars, and bus rapid transit. Comments must be received on or before April 14, 2022.

The deadline to apply for funding from the Rebuilding American Infrastructure with Sustainability and Equity (RAISE) discretionary grant program is 4 p.m. CDT on April 14. The program is designed to assist communities in carrying out transportation projects with a significant local or regional impact, which could include anything from bus lane improvements to highway and bridge repairs. The Notice of Funding Opportunity for the $1.5 billion in RAISE grant funding can be found here.

The deadline for state and local officials to nominate areas that should be designated as “alternative fuel corridors” for purposes of IIJA grant funding is May 13. More information on this process can be found here.

The FCC recently released a Notice of Inquiry seeking comment on how to implement provisions in the IIJA that require the FCC to facilitate equal access to broadband internet access service and prevent digital discrimination. Comments are due by May 16.

Applications for funding for the Low or No Emission Grant Program and Grants for Buses and Bus Facilities Competitive Program are due by May 31. The Low-No program provides funding to state and local governments for the purchase or lease of zero-emission and low emission transit buses, including acquisition, construction, and leasing of required facilities. The Buses and Bus Facilities Program is designed to assist in the financing of buses and bus facilities capital projects. More information on these two grant programs and the application process can be found here.

NLC is regularly posting explainer videos that address what city officials need to know about the IIJA. These videos can be accessed here.

Local Government Code Sec. 140.008 requires political subdivisions, including cities, to annually report debt and other financial information to the comptroller. Under comptroller rule, the reports must be submitted within 180 days of the end of the political subdivision’s most recently completed fiscal year. For cities with a fiscal year ending on September 30, the 180-day deadline is March 29.

Cities are encouraged to visit the comptroller’s local debt reporting page to get more information on what is required in the annual report, and to access the electronic submission form.

The Public Utility Commission (PUC) adopted rules, effective March 17, 2022, increasing the maximum penalties to $1,000,000 for failure to meet weather emergency preparedness reliability standards adopted in S.B. 3. The League previously reported on S.B. 3 here. The increased penalties apply to: (1) electricity generators in the ERCOT power region; and (2) transmission and distribution providers in the ERCOT power region. The PUC adopted the rules after receiving public comments from various entities, including the Texas Public Power Association.

The Texas Department of Housing and Community Affairs (TDHCA) has proposed rules changes to the existing Emergency Solutions Grants application process and the use of the funds. The proposed rules can be found on the TDHCA Public Comment Center here. The rules are scheduled to appear in the March 25, 2022, edition of the Texas Register here which will constitute as the official version for public comment.